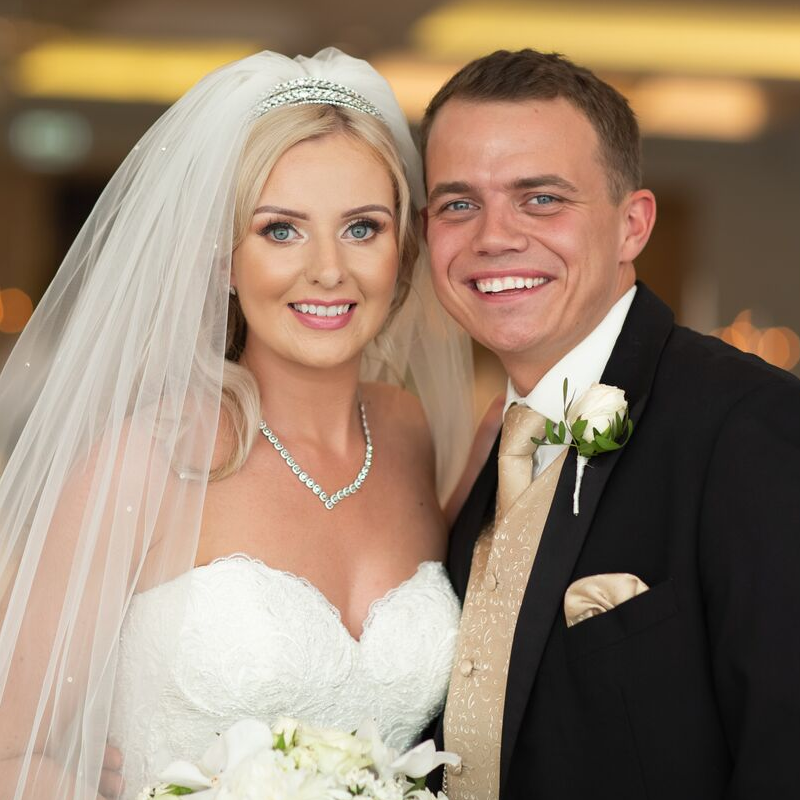 Carleen and Gary’s love story began back in their university days at Queen’s University, Belfast. For a few years, they were just friends, until Gary bit the bullet and asked Carleen out on a date at their local cinema to see the movie Contagion, where Carleen fondly remembers he fell asleep halfway through. After that, they continued to go on more dates and became an official couple a few months later. 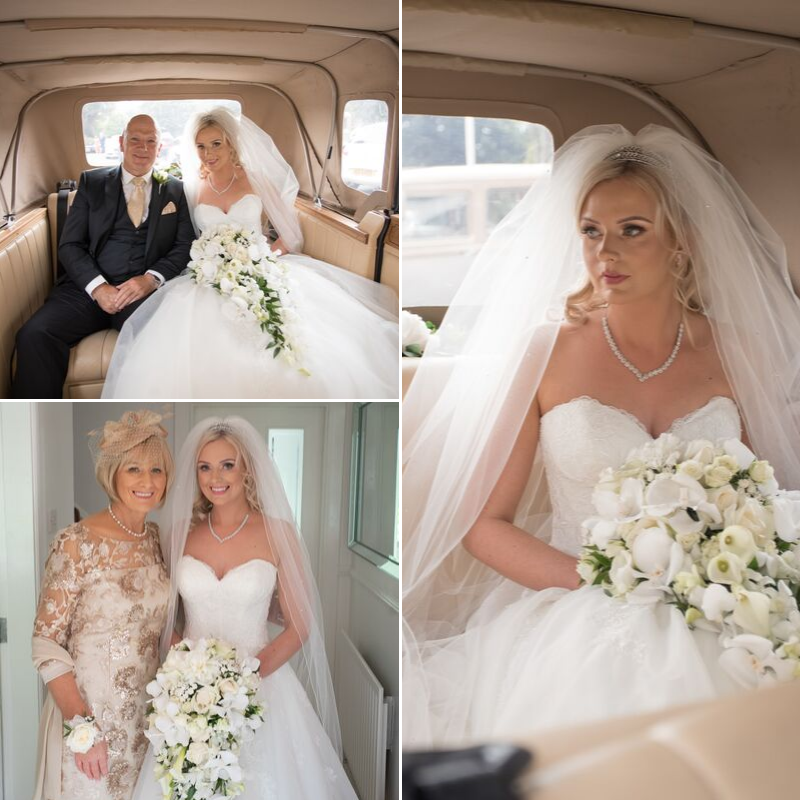 Gary took Carleen out for an evening meal in their hometown of Derry when he asked Carleen if she wanted to go to Lunn’s Jewellers in Belfast the following weekend to look at engagement rings. Carleen said, “I was so excited when we arrived at Lunn’s. I was looking for the perfect pear-shaped ring as I had always a wanted one. After trying on a few, I had chosen the first one I had picked out.” Afterwards, Gary began planning his proposal and booked an Executive Room with stunning views over the River Finn in Jackson’s Hotel, Ballybofey, Donegal. Carleen said, “He had arranged for a bottle of champagne to be brought into the room on arrival and that’s when he proposed to me on on the balcony. With the stunning backdrop of the river, it was spectacular and such a special moment between the two of us.” 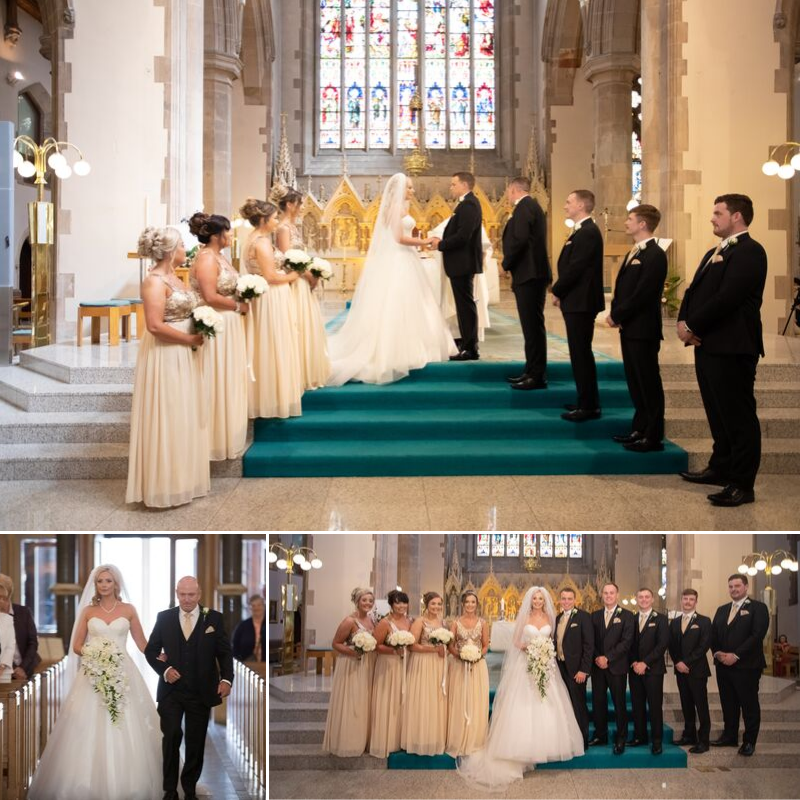 Carleen and Gary always knew they wanted to marry in St. Eugene’s Cathedral, due to its beauty and significance in Derry. When choosing their reception, the couple did a lot of research and attended wedding fayres and visited venues before making their choice. However, it was when they visited the Grand Ballroom at the Everglades Hotel, that they knew it was the venue for them. “We were blown away by it. We met Catrina Myers, Business Development Manager, Mairead Kelly Events Manager, JP and David who were all so welcoming and helpful from start to finish. Everyone who attended the wedding could not have commented enough on how excellent the customer service was throughout the day. The hotel went beyond expectations and staff paid attention to every single detail,” Carleen said. 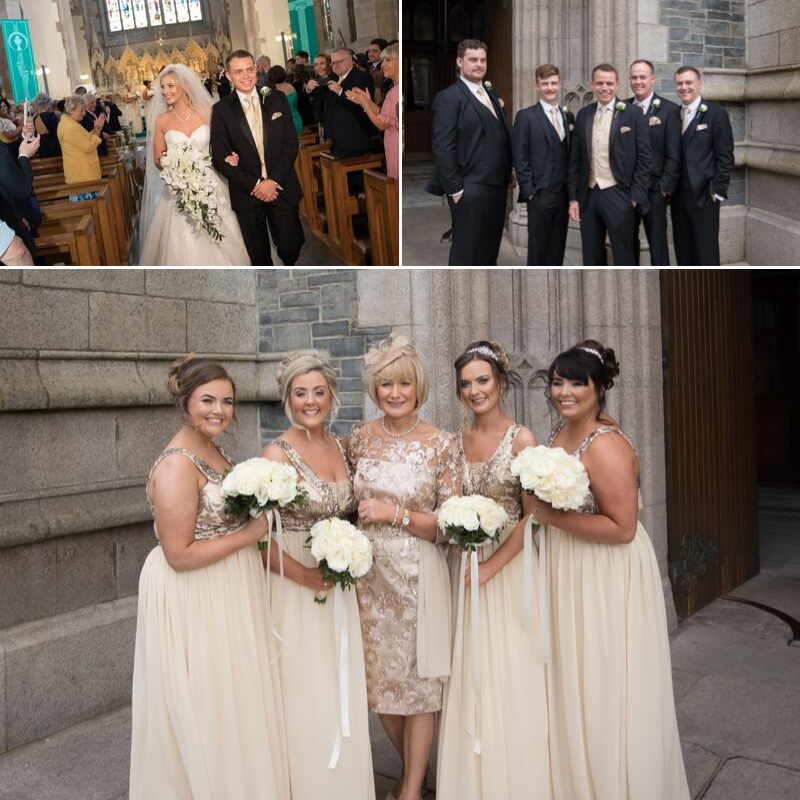 When they began thinking of what style they wanted their wedding to be, Carleen and Gary used the website Pinterest to help inspire them. “Gary and I were able to create shared boards and collaborate with my mum and sister on different ideas throughout all of the wedding planning. I was very lucky that they are both very creative and much of the styling was done with their input.”

But it was when they booked their transport that they realised they wanted a gold, white and cream colour scheme. Carleen explained, “We booked our transport through Gerard McGirr which were all coloured champagne and gold. We fell in love with how they looked and knew from that point on that we realised we wanted to have everything gold and cream as our wedding’s main style feature.” The couple also incorporated a traditional style, with a special focus on lace, flowers and sparkle, going for an opulent and classic look. 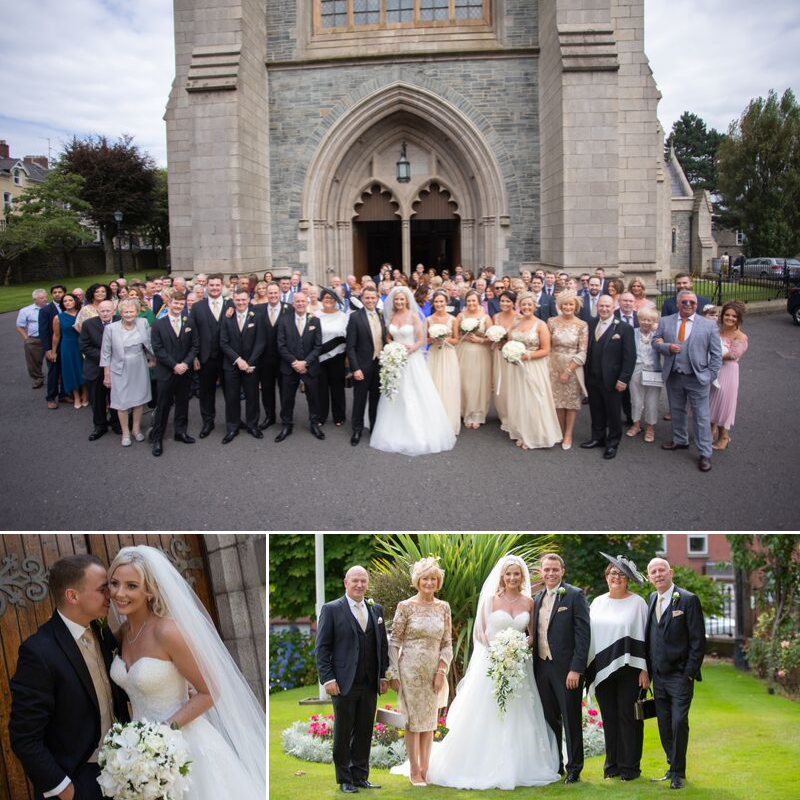 When it came to shopping for Carleen’s dream wedding dress, she visited many bridal boutiques. However, it wasn’t until she visited McElhinney’s in Ballybofey with her sister Aimee and mum Loretta where she found ‘the one.’ Carleen said, “As soon as we walked into McElhinneys, we were greeted by a member of staff, Mary T, who took us through everything. We had our private appointment room which had my name on the door and we were given plenty of time to choose a selection of dresses which was amazing. I’d tried on so a few before I came across a dress designed by Maggie Sottero and straight away I knew it was the dress for me. I loved the shape the built-in corset gave me and the long train at the back. It was so beautiful.” 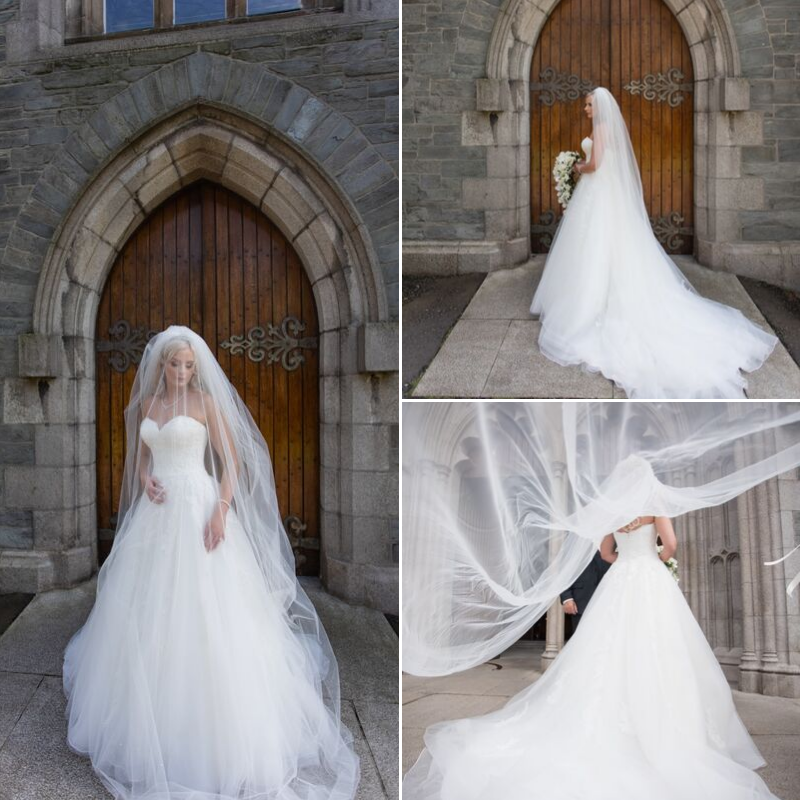 Carleen’s bridesmaids looked stunning in flowing gold chiffon dresses, customised with added lace which matched theme and style of the day. “We purchased the bridesmaid’s hairpieces and bracelets from Jon Richard and their earrings were also by Swarovski. My mum’s outfit and hat were both from Cilento which complimented the bridesmaid’s dresses.” Carleen’s flower girl’s dress and shoes were from John Rocha, which were adorned with delicate lace accents.

Groomsmen and page boys looked smart in suits from The Suit Lounge, Derry. Carleen said, “The service and advice we received by Lorcan at The Suit Lounge was fantastic from start to finish. We chose black suits as we felt it would make the gold colour theme stand out. We found the perfect shade of gold ties and the groom’s waistcoat both in Debenhams,” Carleen said. The groom’s mother also chose to match her outfit with the groomsmen suits and opted for a stunning black and white outfit from McElhinneys. 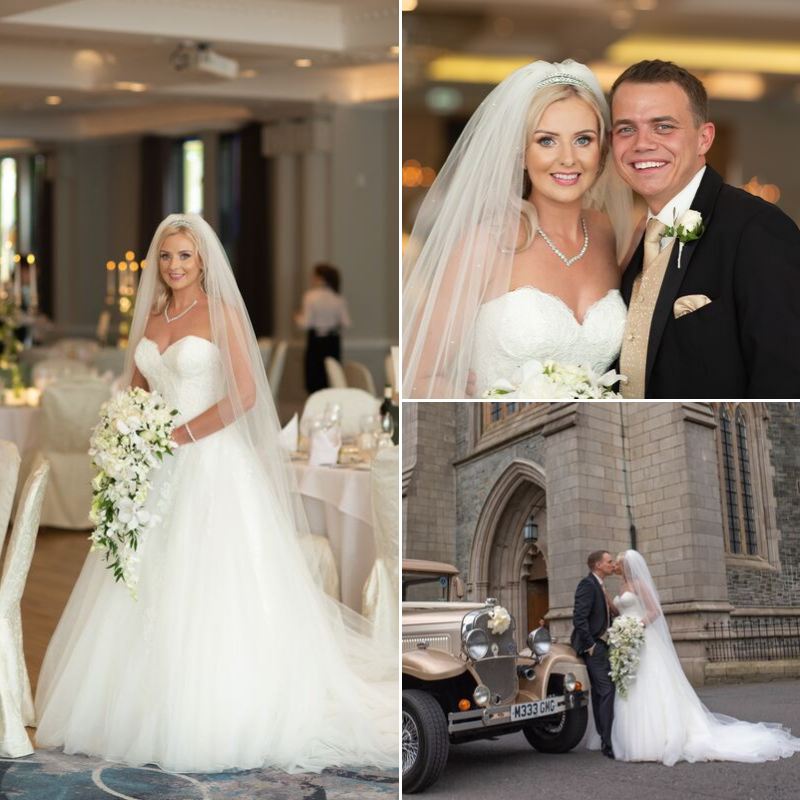 For their wedding flowers, Gary and Carleen chose white and ivory roses as the main part of their floral displays and bouquets. For the ceremony, John Paul Florist, Derry, created beautiful pew ends which were a mix of gypsophila and ivory roses, fastened with ivory ribbon, and also created a stunning top table display for the reception. The bridesmaid’s bouquets also consisted of ivory roses with ribbon to match their dresses. John Paul also made an extra-long bouquet for Carleen which balanced the drama of her dress and veil. John Paul also specialises in millinery and made a beautiful handmade beaded headpiece for Carleen’s mum, which she was able to wear for the evening reception.

Flower garlands were also wrapped around the hotel candelabras and the couple added champagne coloured gems and flower heads to each guest table. They also hired two cream and gold thrones for the bride and groom at the top table and added fairy lights to drape across the curved window during the reception.

When it came to choosing their wedding photography, Gary and Carleen did their research. An important decision, they were instantly drawn to Mustafa Oymakwork of Yez Lifestyle Photography. With is beautiful and artistic style, when they met for the first time, they got on well and knew he would be able to put them at ease on their day and create beautiful results. Likewise, for their videographer, they researched thoroughly and searched for someone who had a lot of experience in creating high-quality results and booked Simon Barr Wedding Films. 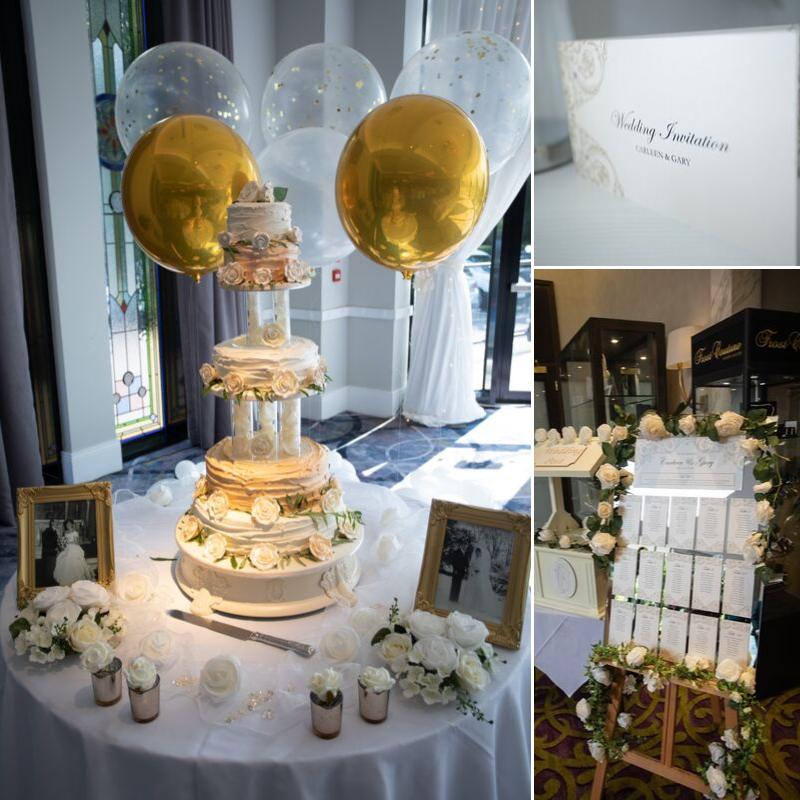 IT’S ALL IN THE DETAIL

Garry and Carleen had scratch cards in gold envelopes for each guest and wedding day Yankee candles in small boxes at each place setting. They also had a name place cards set out for each guest which added a pleasant personal touch and keepsake. Across the top table, they had bouquets, gold vases and candle holders. On their guest book table and cake table, they had gold photo frames with photos of weddings from past generations. Their wedding date also coincided with another important, it was also Carleen’s grandparents 62nd wedding anniversary, as well as Gary’s grandfather’s birthday, which meant it was nice to include photographs of them on the couple’s wedding days. They also purchased a mirror and flower garlands for their table plan which was printed by The Wedding Workshop, City Print, Derry, who took care of all of their wedding stationery. They also made their Order of Service booklets, as well as beautiful gold and cream wedding invitations, which were adorned with small  diamantes.

Guests were treated to blended tea and coffee with homemade traybakes and sparkling wine, berry gin fizz and Guinness drinks reception with a champagne fountain display.  Their menu consisted of a starter of homemade cream of vegetable served with a warm homemade wheaten scone, a main of a short rib of beef, slow-cooked in a red wine and herb jus with Yorkshire pudding or roast turkey and ham with seasonal stuffing, chipolata sausages and cranberry sauce. To finish off, a duo of desserts were available, raspberry ripple and white chocolate and profiteroles with chocolate sauce and freshly brewed coffee or Thompson’s Blend Tea. There were also excellent choices for those with special dietary requirements including an excellent range of vegan, vegetarian and gluten-free options. And in the evening, Gary and Carleen had a fantastic buffet and Candy Cart when their DJ Gerard Dillon Entertainments and Band The Housem8s were playing. 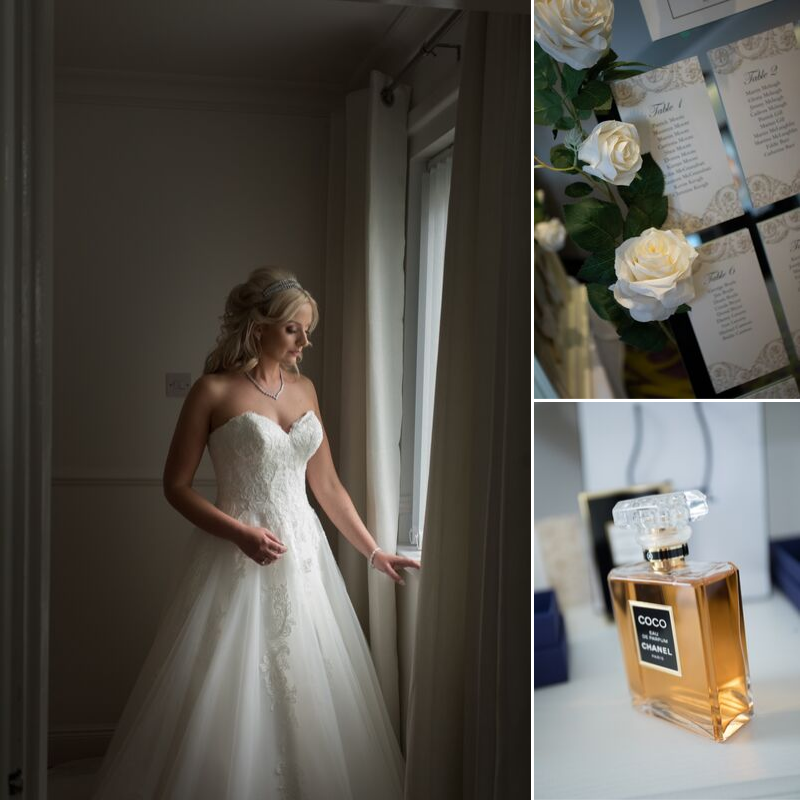 For Gary, his favourite moment was when he saw Carleen for the first time at the top of the aisle. He said, “I have never seen anyone as beautiful in my life and have never felt butterflies like it! The feeling of love took my breath away.”

For Carleen, she said, “I had been so nervous all morning when I was getting ready at my parent’s house. When I reached the top of the aisle to meet Gary, he looked very nervous also. But as soon as we were by each other’s sides, I immediately felt a sense of relief and couldn’t stop smiling, I felt much better when we could be nervous together! It has to be one of the best moments I remember from the day.”

Are you a bride or groom to be? For more tips and inspiration, make sure you head along to The Wedding Journal Show Belfast on Sat 5th & Sun 6th Oct – get your tickets here! 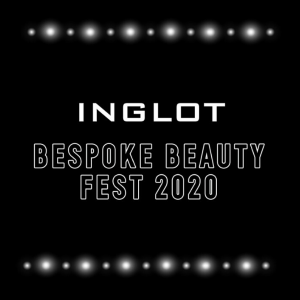 It’s Time To Kick Those New Years Blues & Get Glam 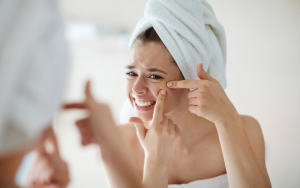 How To Help Prevent Acne Breakouts On Your Wedding Day 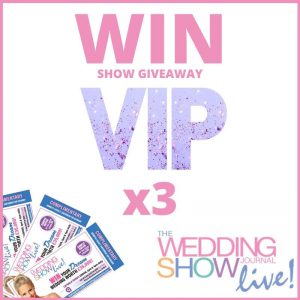