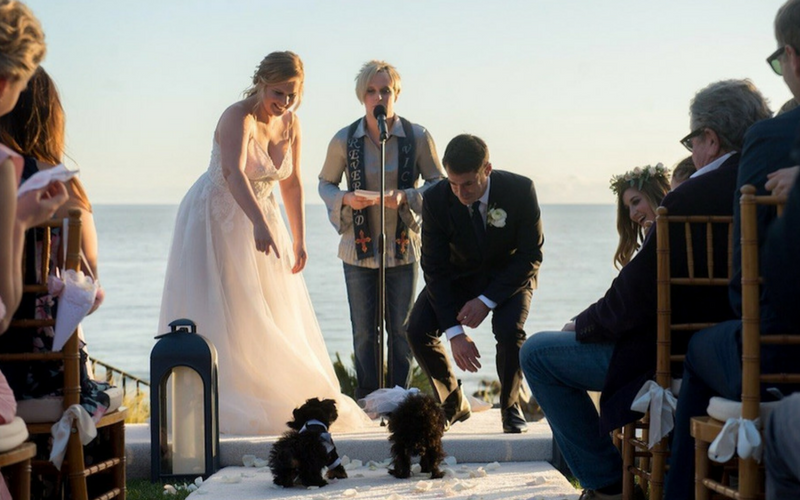 According to Us Weekly, Amy said her ‘I do’s’ to farmer-turned-chef Chris Fischer on Tuesday at lavish ceremony in Malibu. The wedding took place in a stunning rented home in front of just 80 people, which included some famous faces such as Jennifer Aniston, Jake Gyllenhaal, Jennifer Lawrence, Larry David, Judd Apatow and David Spade!

Taking to Instagram, Amy shared snaps from her big day with her followers looking blissfully happy with her new beau, family and friends. In a series of photos, Amy uploads some intimate images of the ceremony with the caption “Yup”, which shows pictures of her at the altar with Chris, as well as their two small black dogs.

In another picture, Amy is posing with her friend Jennifer Lawrence who is wearing a pink pleated dress, as well as other celebs. The comedian looked beautiful and relaxed in a spaghetti strap floaty chiffon gown, with minimal accessories and her hair in a tousled plait.

In what was the first time they had gone public with their relationship since beginning dating in November, Amy and Chris attended Ellen Degeneres’ 60th birthday bash last weekend, uploading a kissing selfie to Instagram. Fast forward one week, and … they’re married! Well, we suppose when you know, you know!

Happy Birthday @theellenshow thank you for having us!

It’s a big week for Amy as the trailer for her new film I Feel Pretty was also just released. The cast of the film includes the likes of Michelle Williams, Busy Philipps, Emily Ratajkowski, Tom Hopper and Naomi Campbell, see the trailer below:

Congratulations to the happy couple!