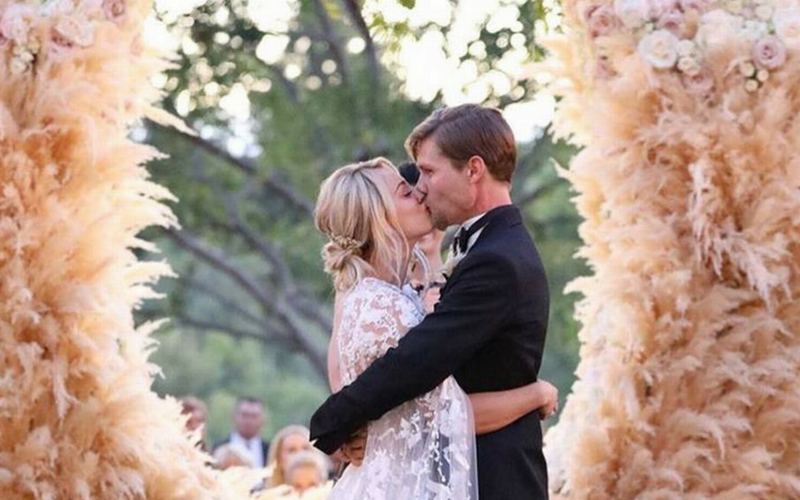 Cuoco and Cook got engaged in November 2017 after dating for nearly two years. This marks the second marriage for the actress who tied the knot to Ryan Sweeting in 2013, but split less than two years later.

The nuptials took place in a horse stable near San Diego – and the bride wore not one, but two stunning designs, including a very fashion-forward jumpsuit.

The newlyweds both shared plenty of photos of their big day onto their Instagram accounts using the hashtag “KCSquared” – as both of their initials are KC.

What did she wear?

For the ceremony, Cuoco wore a lace Reem Acra gown with a beautiful cape. She wore it over a spaghetti strap A-line gown in the same fabric with her hair up in a chic low bun, and completed her look with a simple hair accessory.

She then changed into a daring lace jumpsuit for the reception which was designed by Tadashi Shoji. Cuoco worked with stylists Brad Goreski and Daniela Romero for her whimsical look.

The ceremony took place in front of a giant horseshoe-shaped flower structure with feathers. Cook walked down the aisle to a cover of Mariah Carey‘s “Dreamlover” and Cuoco walked to one of their favorite songs, “I Will Love You,” which Gin Wigmore performed live. Her father walked her down the aisle.

Cuoco and Cook’s pet dog Ruby was carried down the aisle, while dogs Norman and Tank were led on leases. Photos of them were also on display around the venue. With a strong passion in animal safety and welfare, the newlyweds decided that in lieu of gifts, guests would kindly donate to dog donation center. 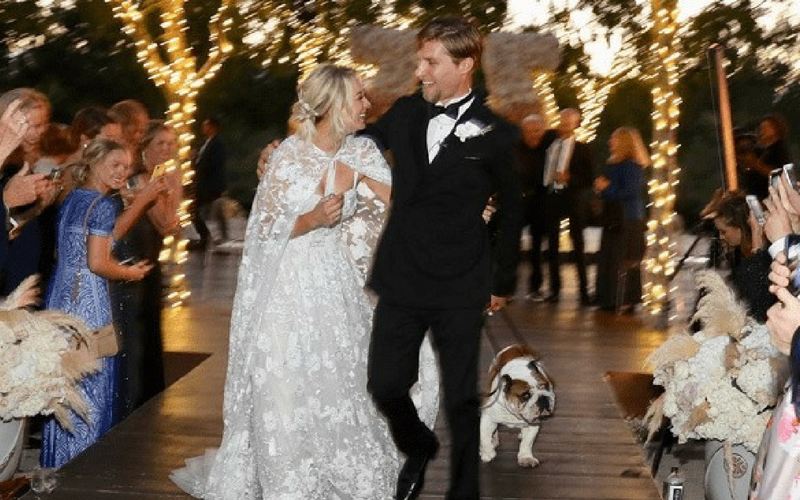 Guests sat in a circle around them and the officiant, Cuoco’s sister, Bri Cuoco, who got ordained for the wedding.

The couple tied the knot outdoors on a ranch, and the equestrian elements were strong throughout the wedding celebrations.

This stunning Pampa flower horseshoe instillation created by Hollywood based florist Yvonne Van Pelt of The Empty Vase, served as a beautiful backdrop while the couple said their hand-written vows.

The reception had a carnival theme.

Inside the tent, stars were projected on the ceiling. Even Kaley’s father/daughter dance was projected to the sky. Guests arrived via a makeshift tunnel walkway adorned with twinkle lights. The perfect Instagram opportunity!

There were jugglers, acrobats on stilts, fire breathers and dancers and trapeze artists and people munched on cotton candy and popcorn.

Handmade wooden board ‘dinner plates’, gold cutlery and gold equestrian themed napkins, dramatic floral centrepieces; it’s clear the couple’s co-ordinator and wedding stylist Lauren Tatum knew exactly what she was doing when it came to throwing the wedding of the year!