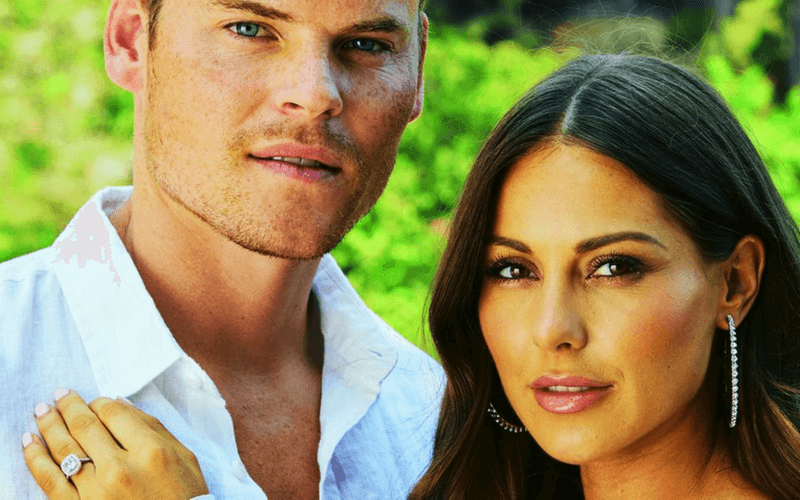 Ryan Libbey popped the question on his birthday August 4 while the couple enjoyed a romantic break to Los Angeles.

‘Ryan and I have known that we want to spend the rest of our lives together for quite a long time. I love him more and more every day, which sounds so cliché, but it’s the truth.’

The showbiz couple – who started dating in 2016 – are currently enjoying a romantic trip to Los Angeles.

Ryan asked to go on a hike but Louise was tired and was more excited at the prospect of dinner plans.

Telling her proposal story, Louise explains “He convinced me to come, so I threw on one of his big T-shirts and some cycling shorts.’

‘We were racing to the top of a hill and he found one of these private paths off the track. There was dust flying everywhere.’

Ryan added: “I said something like: ‘I’ve had the best birthday ever, but there’s one more birthday wish that I’d like. Will you marry me?'”

Louise continued: “He dropped to one knee and opened the box. I had to catch my breath because I thought I was going to faint.”

The muscular hunk admitted he’d been planning his proposal for over four months, and left the ring hidden in a bag for quite some time.

Louise and Ryan first met in 2016 when Louise hired him as her Personal Trainer. The pair are gym and nutrition obsessed, posting envious snaps regularly of the couple working out together, on beaches or London parks.

A wave of love and marriage has hit the marbled streets of Chelsea.

Louise’s first boyfriend on Made in Chelsea was the now father-to-be Spencer Matthews who recently got married to Irish TV Presenter Vogue Williams.

Louise and Ryan’s cast member and friend Oliver Proudlock got engaged last week also. Is there anyone in Chelsea that’s single?